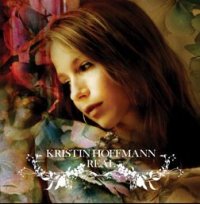 I reviewed Kristin’s previous release “Divided Heart” in 2003 and I really liked it. I’d say, however that Hoffmann has gotten even better in the last few years. Also in that time she’s gone from an Independent artist to being signed by Interscope Records (a subsidiary of A & M).

This recording is very professional and sounds to me like Hoffmann has hit the big time. The only downfall is that this is not available in physical form. You have to download it from one of the online retailers mentioned on her site. Hopefully that will change soon.

“Silhouette” sounds to me like it belongs in a film. Kristin’s voice is exceptionally powerful. It’s deep and strong while still being pretty and feminine. That’s a hard line to walk and she does it nicely.

Then again there are times, as on “Falling” when her voice reaches into an almost operatic range. It reminds me of another CD I reviewed recently by Sasha Lazard. I didn’t used to care for that style of vocal, but I liked it on Lazard’s CD and I like it on this one as well.

“Light” sounds just like Cyndi Lauper’s “Time after Time” at first but then goes on to become a nice original song.

“Real” has some nice string arrangement and has a lovely melody that is comfortable without being too predictable.

I’d say, though I’m not comparing, that if you like Sarah McLachlan and other lush piano popstresses like her that you’ll find a place for Kristin Hoffmann’s music in your heart as well.

Rating: 5 Stars
Comment: I think you did a really good job with your review. Real is an exceptional album and really shows a great growth from Divided Heart’s era. Kristin has the most amazing voice, and her piano and guitar playing walk hand in hand with it. She has is insanely talented and deserves to be recognized for that.
name: Ivy Lynne on Tuesday, May 23, 2006
aww, shucks, thanks –aal