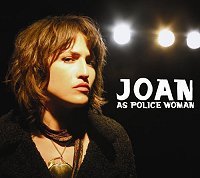 With a discography some 45 releases strong it’s hard to believe that Real Life marks Joan Wasser’s official debut. It comes on the heels of her JOAN AS POLICEWOMAN ep which featured standouts like “My Girl’ and “Stagger Into the Light’ and is an obvious precursor to her work on Real Life.

The title track opens the disc and gives away Wasser’s classical background and Wainwright connections. Written in an attempt to woo a long distance love interest, it sets a thoughtful tone of yearning and lost love.

Next up are two of the three tracks that feature work by Joseph Arthur; the first, ‘Eternal Flame’ is reminiscent of the sweeping soundscapes of Arthur’s ‘Our Shadows Will Remain’, the second, ‘Feed the Light’ is a slow shuffling number and supplies the first appearance of Wasser’s violin. The cd’s first single, ‘The Ride’ recalls a breezy afternoon listening to a jazzy merry-go-round which is clever and appropriate for the lyric. ‘I Defy’ is set as the centerpiece and turning point of the disc. A duet, co written and performed with Antony(minus the Johnsons) with its old school groove horn blasts and vocal call and response, ‘I Defy’ is prime new wave soul and introduces the deeper, more soulful side of Wasser’s writing. The lilting low key ‘Flushed Chest’ follows and teases with a reggae bounce but never quite delivers. Still it best illustrates Wasser’s great talent for combining many different musical elements in an interesting way. The song is part soul, part reggae and employs both a horn section and a violin solo but never sounds overblown or awkward.

Both ‘Save Me’ and ‘Anyone’ follow ‘Defy’s’ lead with undeniable cool and mellow soul mixed with heavy Wurlitzer and highlight Wasser’s vocal range. The cd closes with ‘We Don’t Own It’ an elegy to old friend and occasional tour partner, Elliot Smith. It’s a quiet gem of a song that Wasser’s fans might remember from her UK dates as it was a crowd favorite. Wasser has fleshed it out for the recording with violin, a bit of bass from Rainey Orteca and soft brushstrokes by Ben Perwosky.

And for anyone looking for Wasser’s trademark violin there is ‘Cristobel’, which has plenty of the screeching violin that made Wasser famous and vocal back-ups by Arthur. It has its heart in early eighties pop and is one of the most promising tracks on the disc.

Wasser has called her music, punk rock r & b, Real Life sounds more like rocking soul with smart arrangements that dip into jazz and passionate singing with hope and beauty to spare.