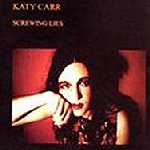 Vocally she has some of PJ Harvey’s power and Kate Bush’s sensuality.

The whimsical “Marmalade Duke” is a welcome contrast to more abrasive songs like “Knickers” in which Carr sings:

“You’ve pulled my knickers off
and left me by the kitchen sink”.

The balance between light and dark is what makes “Screwing Lies” so strong.

Carr is an interesting new voice.