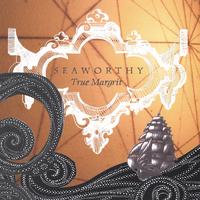 This is a really unique recording. It’s not really rock, not really pop, certainly not country or folk… at times reminds me of both Stephanie Rearick and of Leah Callahan. It’s that cabaret pop-rock thing that I find so charming.

Even though it reminds me of these mentioned ladies, I wouldn’t say it sounds like them. It has really got its very own personality.

I’ve listened several times now and each time I hear something new and interesting. Let’s see if I can describe it at all.

Like I said, cabaret-ish at times. But also when I hear some of the songs on their own (that is, not in line with the rest of the album) they sound almost radio pop-like.

The main instrument is piano, but there’s so much else going on. True Margrit is made up of three musicians: Margrit Eicher (Voice, piano, keyboard, glockenspiel), Gary Hobish (basses, percussion, guitar, voice) and Andrew Bacon (drums, percussion). Thought there are three main members of the group, there are at least 10 other musicians that helped on this project and it shows.

This is a very classy recording from the songwriting to the musical performances to the production. Everything sounds great!

If you’re looking for something out of the ordinary that will please your ears, give this a listen.

Stand out songs: “From Another Zone”, “Electricity”, “Members Only” reminds me of my Rock Star Boyfriend Ben Folds so you know I love it.