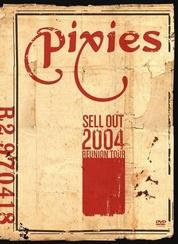 This is basically a concert video of the Pixies Reunion tour of 2004. It was recorded in Japan, Scotland, France, Louisiana, California, Massachusetts, Texas…and that’s just the first song!

Actually the rest of the concert portion is mainly performances shot in France. It features all their greatest hits and more.

The band members are looking less like rock stars and more like soccer parents, but I guess we all have to grow up eventually don’t we?

There is not a lot of stage banter, but it’s hard to tell if that is because it was edited out or whether the band just doesn’t do a lot of that. I’ve never seen them live, so I can’t say.

Special features include a bunch more songs and interviews with their tour manager and production/lighting manager. I found the commentary very interesting but would have liked to hear from the band members as well.

All in al this is a good DVD to have if you are a fan of the Pixies.