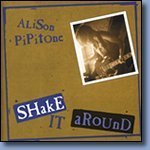 I have a weakness for raspy, unrefined voice–especially combines with the kind of fingers that can white-knuckle their way through most any song. Combine that with poetic lyrical stories about working-class kind of folks who spend their weekends on the back porch with an acoustic and some good friends, and I’m hooked. I suspect you will be, too.

Pipitone squeezed out of the same world of sound as early Bruce Springsteen (“The River”, “Darkness on the Edge of Town”), Courtney Love or Ani Difranco, and maybe a little Indigo Girls as well.

Scary combination? Absolutely–and it all comes together to make Pipitone one of the best bets out there.

Reviewing this cd was pure soulful pleasure to my ears, as well as my heart and soul. Pipitone stirs it up on this release.

She is a bonafide rocker with a poet’s heart and a youthful emotional perspective. A true talent, she encompasses more than just one musical genre.

Pipitone peppers this release with a little rock, folk, blues and som down-home country songs to boot. This girl is the real thing.

She has a musical style similar to Ryan Adams – only better. Pipitone is a skillful storyteller with a Dylanesque flair to her songwriting and is equally capable of touching the listener with her words. Pay attention folks; this one is a keeper.

Buy it and mark your calendar for the day Pipitone plays in your town.