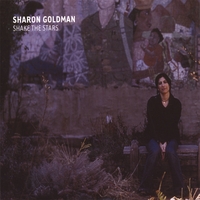 I’ve reviewed two of Sharon’s previous releases and I enjoyed them both. However, I honestly believe this is her best effort yet.

These songs are so likeable. Her voice is very welcoming; it makes you really want to listen carefully to see what she has to say. Her vocals are flawless.

Her last record was written shortly after ending a relationship and it had it’s share of sad moments. She seems to have recovered for the most part. But see “You Hardly Cross My Mind”. Even though she’s “made new memories”, the simple fact that she’d still write a song to her former love shows at least some of the residual pain is still hanging around.

She is based in New York and her songs show that. They make me want to up and move there. The things she describes are just how I picture life in New York would be.

They’re all well written clever songs, but my favorites are: “Opening” which is not the opening song, has a hauntingly gorgeous feel to it. “The Rope” is a really cool ode to friendship and I like her acoustic folky take on The Cure’s “Just Live Heaven.”

A nice album in all respects.

Track Listing
Listen to track samples
1. The Subway Song (You Were Waiting for Me)
2. Shake the Stars
3. Opening
4. ‘Til You Come Around
5. Suburban Sunshine
6. Just As it Should Be
7. Bad Day
8. The Crosswalk
9. Empty Chair
10. You Hardly Cross My Mind
11. Just Like Heaven
12. The Rope