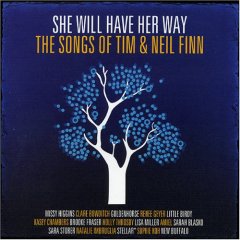 Album Name: She will Have her Way: The Songs of Tim & Neil Finn
Artist: Various Artists
Year/Label: 2005 / EMI Int’l
[Buy at Amazon]

What a great compilation. I’ve been a sort of sideline fan of the Finn brothers for some time. I enjoyed Split Enz when I was in high school and Crowded House in college. So I knew some of these songs but not all of them.

The same goes for the artists. I knew some of them, but most were new to me.

So this was a great record for discovering both new songs by a couple of near legends of pop and also some great new artists (or at least new to me).

Well I love Sarah Blasko. Her record, “The Overture and the Underscore” is one of my favorites of 2005. It doesn’t hurt that she’s covering probably the best known and loved Finn song, “Don’t Dream it’s Over”. Great combination.

My favorite discovery is probably Brooke Fraser. She reminds me a little of Sarah McLachalan. But I also love Holly Throsby’s sexy smoky voice.

I also enjoy Missy Higgins, but don’t have any of her stuff yet. I wasn’t too shocked that while listening, one song kept making me go see who it was, and it was always this one. Great voice, great song.

Renee Geyer was also new to me. Her voice is almost manly but sounds so great on her song. The arrangement is really cool too.

I can’t wait to start gathering CDs from these artists! I’ve got my work cut out for me.

Note: this CD is not really released in the US so if you live here and want it, you’ll have to pay dearly. But I looked on Amazon (use the link to the left) and there are some new and used for sale by others. That’s probably the way to go.

Rating: 5 Stars
Comment: Awesome compilation. A great variety of talent singing some of the best songs ever written. A few favourites: Clare Bowditch – Fall At Your Feet. The opening song of the record and it sets the tone nicely for the rest. A great version of this wonderful song. New Buffalo – Four Seasons In One Day. Another great song, this stripped back version is very very good. Just a piano for the first half, it it amazing!
name: Sophie on Sunday, March 12, 2006