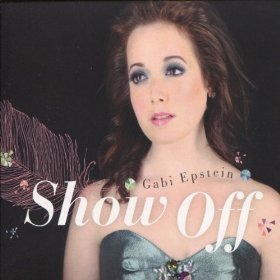 Gabi Epstein is an actress and singer and this is her debut album. She’s supported by a talented band, who follows her lead expertly.

You’re Gonna Hear From Me opens with a confident jazzy tone, and a peerless vocal.

Corner of the Sky is vampy and strong, Epstein handling the song with her usual finesse.

I’d Rather Cha Cha Than Eat is an amusing run through the song that she handles well. Her vocal is teasingly perfect, and the backing subtle and cool.

An unexpected trawl through Tom Petty’s I Won’t Back Down lends the song a good quality in Epstein’s capable hands.

She has a strong voice but knows when to hold back. That makes all the difference on this brilliant album.

Track Listing
1 You’re Gonna Hear From Me
2 Show Off
3 I Would Have Wanted
4 Corner of the Sky
5 Cruella De Vil
6 Good Mother
7 I Am Changing
8 I’d Rather Cha Cha Than Eat
9 Unusual Way
10 I Won’t Back Down
11 Laila, Laila

← Announcement
Album Review: Be Here by Rachel Platten out today! →