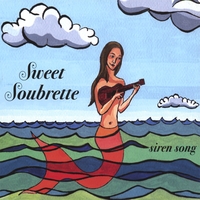 Sweet Soubrette aka Ellia Bisker plays the ukulele and sings beguilingly of love on her debut album. She once worked with a circus and it kind of shows.

Lucky to Be Here reminds me of Regina Spektor as she sings of growing to love someone.

Suckerpunch has her singing “There’s nothing more romantic than a doomed romance” even as she picks lightly at her ukulele.

Unlucky in Love continues to explore the theme with great spirit and sass, Bisker’s lovely voice coiling around the melody.

She sings of a mermaid trying to ensnare a sailor on the title song, succeeding in sounding like a siren.

It’s a short but sweet album, leaving the listener wanting much more.

Shortly after I posted Anna Maria’s review, this arrived in my mailbox as well. So I won’t do a full-fledged review, but I wanted to make some comments.

This is really unique, I know you don’t hear the ukulele often in popular music, but it’s not just that. Her voice is quite distinctive and while you generally think of uke music as sweet and happy (or at least I do), this is a little darker.

She makes nice use of minor chords which lends a feeling of uncertainty to the music. I like it.

Pacemaker is almost a dirge.

I’m intrigued. I too, would like to hear more.

← Album Review: Playtime by Grisbi
The release of Carly Simon’s ‘This Kind of Love’ on April 29th! →