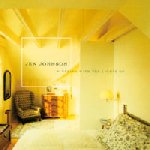 The title track, “Sleeping with the Lights On” is a catchy pop song that is immediately likeable. The next 3 songs are just as good.

Jen Johnson reminds me of Lisa Loeb and it’s not only because of the photo of her on the back of the CD in which she is wearing Lisa-style glasses. In actuality she looks nothing like Lisa. But she has a sweetness to her voice that is similar.

This is Jen’s second CD though the first one released in 2000 also only has 4 songs on it. I would like to hear more from her.