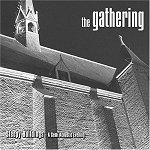 The Gathering has always been a very prominent band in the gothic-metal genre, being one of the first bands to make such music on 1995’s “Mandylion”. The band continued their heavy course of music on “Nighttime Birds”, released in 1997, and reached the zenith of it in 1999, when they released “How To Measure A Planet?” and shortly after “If_Then_Else”.

In the two years that followed, The Gathering split with their label and started to experiment even more with their music. For the 2003 album “Souvenirs”, they bought in a guest vocalist and started to make music a bit more ambient. This release, being their second live album, was much anticipated.

The first thing that surprised me when I got the CD, was that it said “A Semi Acoustic Evening”. I had a hard time imagining how they would do that, because with a singer like Anneke Van Giersbergen, the atmosphere would be most delicate, and a sudden electric riff could devastate that.

However, the second song on the album proved my suspicions to be totally uncalled for. Anneke’s voice is gorgeous, crisp clear, and the soft hints of an electric guitar only help to paint a distant and pretty landscape. The piano accompanies her siren-like voice throughout most of the CD.

A surprise on the CD is “The Mirror Waters”, which was originally recorded before she even joined the band. They do it wonderfully, however.

There are certain songs that only fans of distant and extended soundscapes shall enjoy, such as the 9 minute “Travel”. This is also the only weakness of the album: Anneke’s long, stretched vocals and wails return on every song. She handles them all perfectly, but for a 14 song album with an average track-length of 5 minutes, it’s simply too long, and it had become annoying, even.

Songs like Stonegarden (Also a very old song) provide a nice change of pace, but they are too few.

However, the band puts on a stunning display of musicianship, and Anneke’s vocals are unlike any other in the world. The Gathering has already proven to be a band of constant quality on their studio records, but they have established themselves now as a superior live-band as well.