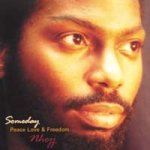 Musically representing the vocal correlation matrix of songwriting polarized social positions, which is contrasted by the minimalist use of instrumental movement. Someday Peace Love& Freedom is a twelve-track CD cause and effect of a four-octave personalized Nhojj’s use of expressionism. And it is Not for everyone…that is, until track-five – “The Beggars Cup”.

‘Hear’ Nhojj (pronounced Naj) suffers under the controlled influence of vocalized passion, singing to the listener the almost visual lyrical point (the human portrait), of what is often seen, but usually, socially ignored. Structured within the slow blending beat of Caribbean and Reggie musical cultures; “The Beggars Cup” is well-arranged, well-written, and emotionally, ‘well-sung’!

The tenth-track ” Love Again”(only fifty-seven seconds long), is the vocal presentation of spiritualized Haiku. It is harmonized poetry… that is sung into song.

And the final track “Someday”, serves as an excellent condensed cumulative reflective ending. It is a message song delivered, by the soothing warmth, of delivered voice.

These three songs (by themselves) should be enough to attract any listener to the singing future abilities of Nhojj. With better production skills (recording and editing techniques) and a good producer, Nhojj could be (and should be) the next coming attraction, of good, ‘art’iculated, song!