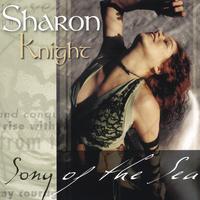 Sharon Knight’s, “Song of the Sun” is a nice trip into the beautiful Celtic world. Maybe it’s just that I am not a very well rounded world music listener, but Knight’s sounds at times recalls Loreen McKennitt (not a bad thing at all).

She makes nice use of the velvety soft, wispery vocals over the music which involves not only piano and guitar, but also mandola, mandocello, and bodhran. This makes for a very lush, gorgeous sound.

Sharon Knight at least co-wrote all the songs except for a couple traditional songs which she and her co-writer, Winter, arranged. She also plays many of the instruments including keyboard and there are some beautiful piano pieces here.

Her lyrics paint some great mystical imagery. Much of it involving water or the ocean or as she calls it in the liner notes, the Cosmic Sea.

She has done a lovely job with her graphics both on the website and on the CD. It displays exactly what is “inside”.

This is a very relaxing, soothing, beautiful recording that no Celtic music fan should be without.

Stand out Songs: Siren Moon, I Fall to My Knees, Song of the Sea.