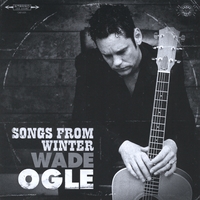 Wade Ogle has played in bands, but here he goes it alone and with goof results.

Lost all Beliefs is suitably soul-searching and has a stunning melody that proves Ogle’s talent for songwriting.

A brave cover of Dylan’s Girl from the North Country proves successful and has a ragged guitar part.

Bonnie and Clyde is one of his own, and though it tips its hat lyrically to the Gainsbourg song of the same name, it has its own flavor.

The country sound is pleasing and Ogle gets under the skin of his protagonists. His songs are of a rich hue, and have a distinct, dark appeal.

Track Listing
1. Lost All Beliefs
2. Your Side of the Mountain
3. Girl From the North Country
4. Captain of My Pain
5. New Morning
6. The Real Masterpiece
7. William Bonney
8. Bonnie & Clyde
9. Huddie Leadbetter
10. Robert Johnson
11. Got to Move / Amazing Grace