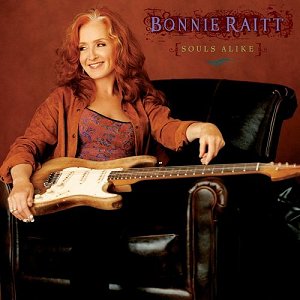 Bonnie Raitt is so cool.

I don’t even like country or blues (and I know she’s got a touch of both) but there’s something about her that I love. Everything I’ve heard of hers is golden to my ears. When Nick of Time came out I listened to it so much I think I wore it thin.

Well, I’ve only heard this a few times and I can already say this is going to be another one in heavy rotation.

The songs, though familiar sounding, are very fresh and interesting. She hasn’t strayed too far from the Bonnie you already know and love. But it’s nice to hear new tunes coming from that same comfortable place.

The exception would be “Deep Water”. When I first put the CD in, my player was on shuffle so it played that song first and I had to do a double-take….is this really Bonnie Raitt? It sounded too atmospheric, funky to be her. Of course as soon as she starting singing there was no mistaking. When listening in context with the rest of the CD it fits in right in.

Her voice is still tiptop as is her songwriting and musicianship. This woman knows how to craft a song…a beautiful one (or 11).

I don’t know how much more I can about Bonnie Raitt that hasn’t already been said. This woman is a legend. I doubt any of you have not already heard her at some point. If you have then what you would expect is what you’ll get. If you love her, you’ll love this. If you’re not a fan already, giving this a listen will likely make you one.

Stand out songs: “Unnecessarily Mercenary”, “Deep Water”, “The Bed I Made” (beautiful piano)

Track Listing
1. I Will Not Be Broken
2. God Was In the Water
3. Love On One Condition
4. So Close
5. Trinkets
6. Crooked Crown
7. Unnecessarily Mercenary
8. I Don’t Want Anything to Change
9. Deep Water
10. Two Lights In the Nighttime
11. The Bed I Made