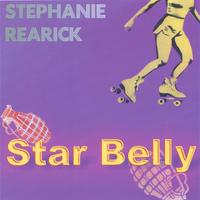 There’s nothing average or mainstream about Stephanie Rearick. She’s officially out on her own now, having been a part of the now defunct Coma Savants. However, this is her third solo release. Each one is a trip (and I mean that) into her world. She’s funky, out there, odd, and most of all a very talented musician. This is more artsy than pop, however this is her most pop-ish release of the three.

Her latest CD is filled with haunting vocals, amazing piano playing and lots of Cabaret weirdness. She utilizes the many-voice-layers-singing-in-unison thing, which at times sounds like a ghost choir.

“Roll Over” has the swooping vocals and unison backing vocals.

The only “drawback”, if you will, is that some of her songs are a kin to a Saturday Night Live sketch. They just go on a little longer than is necessary. Not that they’re not good, just that they just repeat and do the same thing on a loop with nothing new happening. “Long Picnic (reprise)” is one of these. But then again, I’ve never been a fan of the jam band, which is, in effect what she’s doing. It’s just that she’s doing it all on her own. Which is impressive.

The most “normal”…whatever that means…release from a very unique artist. If you are already a Rearick fan, my guess is you’ll really dig this. If you’re not, I can’t promise it will be for you, but if the descriptions sound enticing give it a whirl.

Stand out songs: Along with the above mentioned ones, I like “Hymn”, “Arms” too.