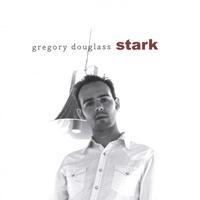 I confess, have a soft spot in my heart for Gregory Douglass. I first heard him last year when he wrote to me and professed his love for many of the same artists I adore. So when I realized he was also a musician I was pretty sure I’d like his music. He sent me a couple of CDs and I was right. He’s just fabulous (doesn’t hurt that he’s quite a hottie as well).

The new album, “Stark” was recently released so now I have a new CD to obsess over.

There is something about Douglass’ voice that is so homey, comfortable. Almost lullaby-like. The music is also very calming (at times, make no mistake, he can turn it up a notch or three as well).

The music ranges from soft whispery piano sweetness (“Alibis”) to full-on pop orchestrations with a strong voice (“Sail the Sea”). He has quite a range indeed. Though for the most part, the general feel of the CD is more of the soft “ballad” type.

I am also impressed with not only his songwriting and his vocals, but he also plays piano and guitar. That sort of talent can’t go unnoticed for too long. I said it in my last review and I mean it still, “Why is he not famous?!”

I really do adore all these songs, but I have a special fondness for “Sail the Sea”