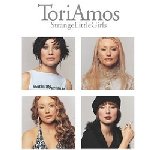 This is Tori’s sixth CD and I’d say it’s very different from any others. It’s a “cover album” for lack of a better term. The songs were all made popular and are written by someone other than Tori Amos.

The packaging is quite clever. The insert booklet shows Tori in an array of different clothing, hair and make up styles; each one representing a different song on the CD. She’s gorgeous in each one of course. The photo shown here is not really what the CD looks like. You have your choice of these 4 designs (at least in America, it may be different overseas).

Many of the songs I was not previously familiar with. So to me, they were basically “new” Tori songs. To my ears, some were a tad boring, (“New Age”) and some were quite stunning (“Strange Little Girl”). The one’s I knew were more enjoyable to listen to (I’m sure the rest will grow on me) were:

“Enjoy the Silence”: I’ve always thought this was a great song. This version just showed me that it really is kind of a boring song without all the techno enhancements that Depeche Mode put into their version.

Rattlesnakes: I’ve been a Lloyd Cole fan for years and this was a nice version of this. Makes me want to take my old Lloyd Cole CDs for a spin.

“Heart of Gold” – Unrecognizable if you don’t pay attention to the lyrics. Cool, strange.

There seems to be a lot of buzz about Tori’s version of “97 Bonnie & Clyde”. Not being an Eminem fan (to say the least) I was not familiar with this track. But I was intrigued. Very spooky. It reminds me of Nick Cave’s “Murder Ballads” CD.
What was disappointing to me for the first few songs is that I wanted more “music”. Not just drums and voice (though it’s a gorgeous voice). I longed for Tori’s amazing piano! It came back about half way through the CD. I am in love the song “Time”. Wow. Beautiful. Maybe part of it is that I just saw Tori perform this on The Late Show with David Letterman (on September 18th, 2001) and I was stunned.

All in all, an album that all true Tori fans will want (but they don’t need me to tell them that). If you’re a lukewarm fan you might want to hold off until you can find it cheap. But I think I’m going to like it more with each listen.