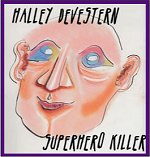 It’s a bird, its a plane, it’s a punk band? A funk band? Ah well actually I’m not sure. Maybe we’ve discovered a new genre of music here.

There’s screaming in track one, acoustic guitars in track two, it seems that someone is cheering through track four and I think Harry Connick, Jr. is a guest piano player on track ten. And slinky vocals are everywhere. Confused? Me too.

The music making up “Superhero Killer” (excellent title by the way) would traditionally be sung by a man (think Fugazi) and every time I find myself tapping a foot with the music, Halley’s angst ridden female vocals snap me out of the trance faster than whiplash. It could be that I’m a victim of society and circumstance (repeat after me I am a feminist, I am a feminist), but admitting you have a problem is the first step to recovery right? So women can do anything men can do, especially where music is concerned.

Anyway, Halley shows a wide range of emotions throughout “Superhero Killer”, actually she demonstrates a handful of feelings in every song several times! After further thought and consideration, this CD could also be titled “My Days on Prozac” or “I wish someone would give me drugs for my ADD”. I can think of many a night where this CD could have talked me down from a ledge or given me the courage to jump…I guess it would depend on the track.

I can honestly say I have no idea what to think of this CD. Would I recommend it? Uhm, well, I can confess to the desperate desire to be first in line for their next live show because I have to experience this music to believe it. And I will definitely be listening to “Superhero Killer” again and maybe again.

From a promotional standpoint Bravo! Encore! Encore to the Halley Devestern Band. How did you make this CD and more importantly why did you write this music? Is everyone in the band okay? Do you need somebody to talk to? Call me, get it all out. Know that you are loved, things will get better and music is the road to recovery.