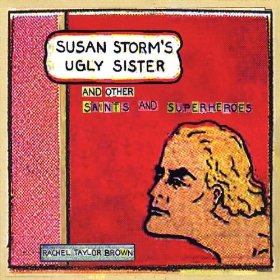 And it is. It’s weird. It’s not mainstream and it’s not for everyone. But it’s great. She has a quirky style that can at times sound dissonant, but that’s the charm. It’s interesting and intriguing and it’s really what I’m in the mood for now.

Bruce Wayne’s Bastard Son reminds me of a particular Eleni Mandell song. It’s got a cool, dissonant, repetitive guitar line that will slink it’s way into your brain and not let go. Be warned, this may be going through your head at 3 am like it does for me.

Her voice is actually kind of secondary on many of these. Which is weird for me to like, but it totally works because the songs are so strong.

Zoe of Rome is a standout jumpy, rhythmic tune that even has tap dancing in the background.

Teresa Benedicta Also Edith Stein is beautiful. It’s a little more sparse with just piano and vocals. But the vocals are nicely layered and her voice is showcased here more proving it is lovely. In fact, when she hits the high notes, she could be mistaken for our Miss Sarah Slean. Likewise on Giovanni Bernardone (St. Francis). Beautiful stuff.

These songs are really varied but without being szichophrenic. It’s a fantastic album, one of my early faves. I think those of you who like quirky and non-mainsteam will dig this too.