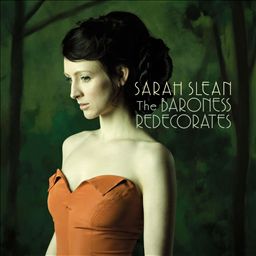 Well, Sarah Slean started out as a Tori clone. Which was OK because there weren’t that many out there (now there are a ton).

Then she took a turn that was a little more mainstream pop.

Next she became a cabaret act who sounded as if she’d had 3 too many martinis (not that there’s anything wrong with that.)

I’ve never had a problem with any of her personas. I love her voice, she writes interesting songs, and she’s got a fun whimsical style that I appreciate no matter what genre she’s doing.

Then there’s the whole ‘record company (or whomever makes these sorts of decisions) doesn’t really want her fans to get a hold of the music.’ A business plan that just doesn’t sound all that solid to me. But what do I know? I never studied business. I just know that the hours I spent trying to get my ears on The Baroness (the full length) are more than I care to count.

Luckily, a kind fellow Sleaniac (do they still use that term?) came to my rescue and arranged to have a copy of this EP sent to me.

So here we are. A record filled with songs that are just what I expected. Melodramatic, sweeping, theatrical, haunting beautiful songs performed perfectly.

I don’t know that I can select favorites because they’re all equally good and they’re similar. So if you like one, my guess is you’d like them all. That said, Compatriots has a fun rhythm that makes me tap my feet and want to dance and spin around in a large ballroom wearing a long sweeping dress.

I still have not heard That Baroness to which this is supposed to be an accompaniment, so I can’t compare or even say if this is an enhancement or not. But I like this. Very much.

3 comments for “Album Review: The Baroness Redecorates by Sarah Slean”