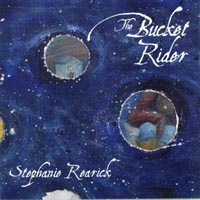 Stephanie Rearick is the lead singer of the Madison band The Coma Savants. I reviewed their first CD some time ago, along with Stephanie’s first solo CD, “The Long Picnic” . Since then I’ve listened to the CDs several times, seen them live twice and they’ve been fantastic both times. So let’s just say, I think I get her. Which is not something everyone will be able to say. Stephanie is unique. I mean that in the most respectful way. She’s just wired differently, but it’s fabulous!

When she is with the Coma Savants they produce what I call Carnival rock. It sounds like it should be played at a fair in front of people in funny hats dancing around (hey, that’s kind of what they look like on stage, oddly enough). Or at least in a room full of nearly drunk folks (which is also the circumstances in which I’ve seen them live).

Alone Stephanie’s music takes a prettier, softer tone. Though she still has some sassy songs. As is evident in “Buster Moon” which has a bit of a ragtime feel and the lyrics are in part:

She makes very good use of the dissonant chord. The songs often go just where you are not expecting. That’s the beauty. Nothing ordinary or predictable here.

The title track is actually an instrumental piece that really shows Rearick’s talent on the keys and on the trumpet. It’s beautiful.

“I Need Sunflowers” is a lovely piece with elegant piano playing and Rearick’s soft soothing voice floating over the top.

The main thing you will take away from this CD is what an incredible piano player Rearick is. They way her fingers fly all over the keys and produce something truly beautiful is a real gift and I’m so glad she’s sharing it with us.