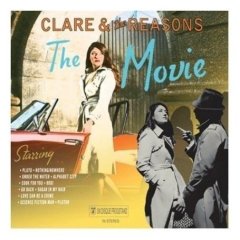 This debut album by Clare Muldaur Manchon starts and ends with a song about Pluto losing its status as a planet. Clearly she’s not your ordinary singer songwriter.

She gets help from Sufjan Stevens on the lovely, romantic Nothing/Nowhere It’s sweeping and utterly gorgeous.

The title of the album says it all, Muldaur Manchon is inspired by old movies and out fashioned romantic ideals. She’s like a more starry-eyed Nellie McKay who would have turned the sweet Cook For You into pure ironic reflection.

Elsewhere Van Dyke Parks helps out and Clare ends the album with the opening song sung in French to add to the quaint sweetness.

The songs are strong enough to rescue them from mere camp and as nostalgia goes this is the cat’s miaow.

[Clare and The Reasons Official Site]