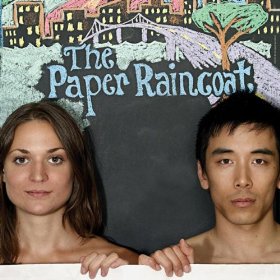 First up, my apologies to Amber Rubarth and Alex Wong. I got this album on Amazon right when it came out. Then I stuck it in my music folder and spaced it out. A month or so later I was all, ‘Oh I need to get the Paper Raincoat album soon’ not realizing I already had it. Luckily I also spaced on purchasing it (again) and I stumbled across it a month or so later. By this time it was too late it include it in my Best of 2009 list as it had already been posted. But is IS indeed one of my favorite albums, not only of 2009 or 2010 but all time. Seriously you guys, this is some yummy stuff.

So as you know I already loved some of these songs from the [EP] that they released awhile back. I actually first fell for some of these songs when Alex was here performing a house concert with Vienna Teng. One song* that was one of my faves at that time didn’t make it onto the EP so I had hopes it would be on this one but it didn’t make it here either (but I finally got it when it was on Alex’s Collaborations CD, which I picked up on Cayamo).

Moving on…so the album opens with some strings that are lovely and soothing and then *crash* comes the pop comes, then Alex’s melty voice, then Amber’s great harmonies and you know you’re in the land of the Paper Raincoat. These two make the most amazingly gorgeous pop music I’ve ever heard. And yes Matthew Sweet, I’m even including you.

What I like about this is there’s a goodly amount of classical stylings here with the piano, the strings, and the crescendo and decrescendo that they’ve got down perfectly. I mean, it’s emotional. Really emotional. Chill-inducing.

These two also have some of the greatest voices of all time. I mean, it’s not like they’re doing anything super wild, like some singers do nowadays. But they both are vocally very comfortable sounding, sweet, happy, sad, and are a perfect match for the music.

Brooklyn Blurs is probably still my favorite. I actually get chills listening to that song. Maybe it’s because when my dad heard it he said it reminded him of his childhood riding his bike around the city (though Minneapolis, not New York) late at night when he was the only one out. So now when I hear it I picture that. Also the harmonies are so gorgeous I get teary. Yes, I am that much of a music nerd, beauty in music makes me cry.

I also really like Rewind. I imagine it was done in one take, as she says in the song. I don’t want to know if I’m wrong.

Don’t be Afraid is also lovely.

I could go on all day about the songs I love (all of them) and why, but I will spare you.

Just know if you’re looking for the perfect pop album look no further. Until they put out another record that is.

*Oh and the song I wished was on here is In the Creases. I don’t know where you can get it as I can’t find the collaboration CD online. Alex?**

**See Karen’s comment below…
Karen, you are absolutely right! I even looked on that (I have it) but I didn’t see it. Thank you!
Folks, you can get that album [on Amazon] and other places.