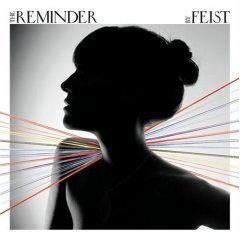 She played no small part in Broken Social Scene’s reputation enhancing parade of brisk atmospheric indie/Americana/rock, through their eponymously titled full length centrepiece at the start of last year. Also, the timelessness of her own 2004 offering ‘Let It Die’, is still lingering on our airwaves and in our adverts through the homesick pop strut of ‘Mushaboom’. However, the ever forward peering Calgary gal, Leslie Feist has managed to top these achievements with this winding exploration of soul searching musicianship. That expands from a rustic pop/folk base like an artist’s reputation after a Glastonbury Festival appearance. ‘I feel It All’ draws out best the width of Feist’s emotive range, as a soft, stroking and pinging accompaniment provides a soothing touch to mitigate the visceral nature of the vocal lashes and lyrical snap. The singing element consists of a grizzly and unpolished Bjork kick that is juxtaposed with calming backing to create a mood melee.

This is an album containing metaphor use that John Donne would have flogged his best quill on eBay for, something that is illustrated best in the fuzzy bass kicked ‘My Moon and My Man’ and the R N B vibe producing ‘Sealion’. For those who don’t like to be strained too much musically there is a delicious ditty, ‘The Park’. This showers soft and supple poetic delivery over a creaking and tender backdrop, demonstrating how nostalgia should be produced through music. The warm cushioning vocal touch continues through ‘The Water’.

Despite the hive of activity that this ranging Canadian has been entangled in. It is evident right throughout this parade that she has been doing much musing and, seems to have taken time to come to terms with the vagaries of life. ‘The Limit To Your Love’, uses a rugged pop push to emphasise this point perfectly and the vocals adopt a foraging Dina Carol feel, increasing even further in clarity. The spirit of old returns in the album’s answer to ‘Mushaboom’, of ‘1234’ that is injected with a horn fuelled push, bringing lounge, pop and a bit of soul to the table. A warm, but troubled piano ode ‘Brandy Alexander’, encapsulates perfectly this artist’s ability to deliver troubled lyrics with refreshing poise and dignity. Two versions of the ambient experiment ‘Honey Honey’ (including a live recording from Toronto), gives the offering dynamic and stretches the longing out. For those hoping that this album would unravel the enigma that is Lesley Feist, disappointment looms, but as Mulder and Scully would agree; there are some mysteries that aren’t meant to be solved.