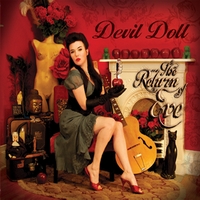 I reviewed Devil Doll’s previous album, Queen of Pain in 2002 and have been looking forward to more from them.

This album does not disappoint. It’s got the same class and sexy attitude that the previous release had shown so well.

Colleen Duffy’s voice is still in fine form. It’s got just the right amount of grit to give these tunes the distinct Devil Doll feel. It doesn’t stray from what you know of Devil Doll, but we don’t want it to. There aren’t that many bands out there performing this type of music (at least that I know of). I know there’s a big underground Rockabilly Culture and I hope that Devil Doll is in the forefront.

Sweet Lorraine is so catchy you’ll be humming it for days. As well as Lord’s Prayer (which is great, just try not to sing the lyrics aloud at work they are NSFW).

They also do a cover of one of my favorite all time songs, Fever. Most people muck this up badly and Devil Doll do change the lyrics, but the greatness of the song is still in tact.

I have a hard time finding things to say about this record, which just shows that this doesn’t always mean I don’t like it. I love this. Devil Doll is one of those bands that I had never heard of until they sent me their first CD and I’ve been hooked ever since. This band is an example of why I keep doing this. I never would have heard of them had it not been for this musical journey.

If you’re sick of the pop and rock music that’s out there now, give these guys a listen. I think you’ll be amazed, as I am, that they’re not more famous.