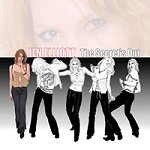 Reminiscent of 1970s funk, this CD is a blast from the past. It’s full of energy, feeling and carries a crystal clear message of fun.

“The Secrets Out” is also a fantastic story from start to finish; songs blend from one to another with remarkable flow and lucidity. I would bet money on the fact that Elliots CD collection begins with Linda Ronstadt and ends with Joan Osborne; a love of soul music shines through each and every song.

Jen Elliot puts a lot of passion behind her vocals, which could best be described as interesting rather than pleasing or melodious. She would wow music theatre audiences anywhere in the world with her diction and clear vocals, but they seem strangely inappropriate when accompanied with this rhythm and blues orchestration.

There is notable talent evident in this CD, but from a purely personal standpoint I miss the grit of customary funk and blues. All in all though, “Jen Elliots The Secrets Out” is an intriguing listen.

Rating: 5 Stars
Comment: I like the CD very much and I do agree with the comment that implies that the artist has made a conscious choice not to do the girtty, growly typical blues thing. But I also agree with the Editor’s Note that the reviewer was just expressing a personal preference and that the review seems pretty fair and balanced.
Barry Goodman on Sunday, May 29, 2005

Rating: 5 Stars
Comment: Terrific CD…as far as the voice goes, this reviewer’s got it all wrong. What the reviewer expects, Jen Elliott isn’t trying to do and the reviewer quite honestly just doesn’t get it.
Robert L. Smith on Tuesday, April 12, 2005
Ed. Note: I think it’s unfair to say the reviewer “didn’t get it”. You two just have differing opinions (though since neither one of you *is* Jen Elliot I don’t know that you can saw what she was or was not “trying to do”). I think this was a very positive review and Anne was simply stating a stating a personal preference.

Rating: 4 Stars
Comment: well dunno about live performances, but she aint bad on the cd. sounds like m people/sade a bit funkier really with more horns ….
By jim on Thursday, December 30, 2004