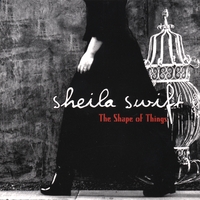 The cover art of this record was well chosen. It doesn’t depict explicitly what’s inside, but the feel of it made me sense before even hearing it that I’d like it. I was right.

Sheila Swift got a great strong voice. Good for both pop and rock. This record is sort of a mix of those. It’s not as poppy but a little more melodic than your average rock (and not as hard, though she can certainly rock out).

The songwriting is very good as well. The songs are catchy while still holding an edge. The lyrics are filled with imagery. The fist song, “Feel Like I Do” grabs the listener’s attention immediately with “Did you hear that sound when my heart fell out? / Onto your table and on to the floor…”

The title song, “Shape of Things” has a bit of an 80s feel with that Rick Springfield-ish guitar line. Fun! I could see this playing well on the radio.

“Sober” is an interesting song about the problems of starting a romance at the same time as completing a 12-step program.

The closer, “There’s Still Love” has a nice twang to it…and for me to say “nice” and “twang” in the same sentence is truly a strange thing. There’s really just a touch though and this makes it more Chris Isaak-y than country.

This is really a great record that I think has something for everyone. I hope to hear more from Sheila Swift.