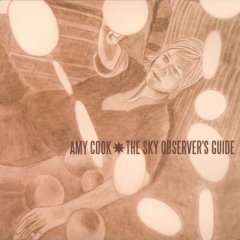 I liked this within the first 30 seconds of hitting Play. Amy Cook’s voice is so appealing I want to either hug it or fall into it.

This is one of those records that are kind of hard to write about. I just love it, I’m not sure what else to say.

I’ll try: Well, in genre I would say guitar driven alt.country. But if you don’t think you like the genre, don’t let that turn you off. I don’t consider myself an alt.country fan, but I adore this.

Comparisons? I know people like to know what someone sounds like to know if they will like it. But I honestly can’t come up with any. She is reminding me of someone, but I can’t put my finger on it. I almost want to say Lucinda Williams, but I don’t really like her (she sounds drunk all the time, and from second hand accounts, probably is) and like I said, this is great.

She has a knack for creating melodies that are haunting and yet catchy. Especially evident on The Reveler’s Goodbye.

Maybe this record is just proof that I can think I don’t like something (a genre, for example) and then someone really talented can prove me wrong. You can listen to samples on Amazon, give it a shot.

Update May 13, 2010: I just found her previous record,
The Bunkhouse Recordings

on Emusic and it’s lovely too!

Listen to track samples while you read
1. Coming Home (The Eclipse)
2. The Answer
3. The Reveler’s Goodbye
4. Where Do We Go?
5. Sunshine
6. Bright Colored Afternoons
7. Loma Prieta
8. When the Day is Done
9. Pearl
10. Feathers To a Crown