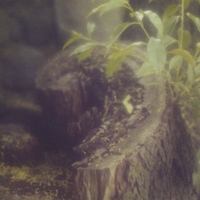 Albert Visick is the Unperson and Kate Doblick supplies the dulcet vocals on this album.

“I am Ill” is more strident, Doblick’s vocals just as urgent as the guitar drone needs them to be.

“Looney on the Ceiling” is calm and unsettling with a simple guitar line. As ever the vocals entrance. It sounds like British band the Sundays used too, all innocence and beauty despite the strange lyrics.

“Before the Storm” sees the band playing softly, but saying much. Like so many other of these songs, it’s quiet style is appealing.

The Unpersons’ album is a thing of understated beauty and charm.

← GoGirlsMusic Founder, Friends Go Out On A Limb To Celebrate 10th
Album Review: Nachtblau by Rosivita →