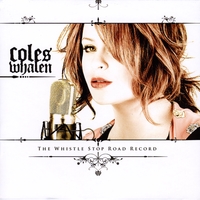 I’ve reviewed many of Coles Whalen’s records in the past and I’ve always enjoyed them. A song or two have even shown up on my mix CDs that I sing along with in the car (alone, of course). So I was happy to see her new release, Whistle Stop Road Record.

I love this album. It’s live, recorded in various cities across the US. and you can tell what a pro she is. I’d love to see her live. Sounds like she kicks some ass.

I love Go Child. It’s bluesy, yes, but I like it. See, miracles can happen. I generally don’t like blues, but when it’s done well, I can really get into it.

Whistle Stop is actually more country, or is it honky tonk?

Wrecking Ball is emotional and catchy. She also does a version of Dire Straits’ Romeo and Juliet. Great cover.

What’s up with Hurricane (Wicked Won Remix)? It’s super electro-disco! Not that there’s anything wrong with that. Just that when I was shuffling this with other albums, I about fell off my chair when I heard it and looked to realize it was her. It’s cool though!

There’s a good mix of styles here (blues, country, jazz, pop) but the constant is Whalen’s wonderful vocals and ability to write a fantastic song.

← “There’s a sale at Penney’s!!!”
Album Review: The Fisherman’s Daughter by Joy Shannon and the Offering →