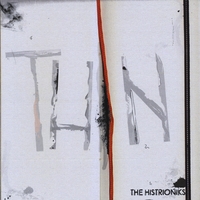 The Histrioniks is Cat and Larry Levy and they’ve been joined by Dave Powers on this album as well as their previous release.

The percussion is really heavy on the cymbals giving these songs a somewhat tinny sound.

Opener Drama Queen makes nice use of minor notes and has clever lyrics.

Misery, reprise, is more beach music-y than their other songs. It’s instrumental for one.

Too Black makes my leg jiggle.

Shattered Youth is maybe my favorite. I like the haunting background vocals.

Cat’s vocals and lyrics on Out of the In Crowd are fun.

The Histrioniks vibe is not for everyone, but if you tend to like the more experimental end of the spectrum you’ll appreciate what they’re doing and have a fun time of this record for sure.