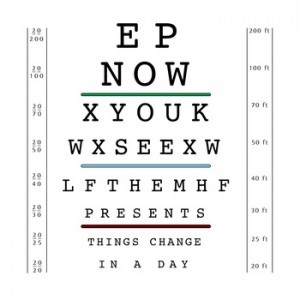 Review by Amy Lotsberg Producer of Collected Sounds
This record was in my rotation in August of last year (yes August!) and I had listened to them for a couple of months on rotation but no songs stuck out to me. So I put them in the “meh” pile.

Then as I was getting ready to purge that “pile” (folder on my computer) I gave everyone one more chance. I went to their website and read more about them. They seem really cute, quirky and fun. So I had to put them back in rotation and listen with a new set of ears.

So upon second review I’m seeing them slightly different. The songs still kind of sound alike. But it really is a fun quirky style. Jangly guitars, clever lyrics, catchy melodies…almost like a very lo-fi Barenaked Ladies but with less instrumentation, and more female voice.

This is the kind of band I would love to see live. They seem like they’re having a good time and that the music would translate well to small venue where they can interact with their listeners.

Track Listing
1.Let Me Know
2.It’s Worth It
3.Baby Burden
4.It Could Be Worse
5.Actors and Authors
6.Spelling Bee
7.No Mystery

[Now You See Them Official Site]

← Some free SXSW stuff
Some Friday Stuff for you →