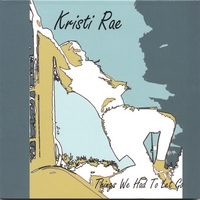 There is something familiar about Kristi Rae’s voice, but I can’t seem to place it. At times I am reminded of Dar Williams. But that might be because these songs, like Dar’s, are story songs for the most part. The vocals and lyrics play more of a role than the guitar playing. That’s not to say the guitar playing isn’t good, it is. It just knows when to stay in the background is all.

Kristi Rae sometimes uses that effect where her voice is either amplified oddly or there are layers of vocals singing in unison. It’s an interesting technique and gives a bit of an eerier quality to the songs in which it’s used. (‘No Sun Today’ is a good example).

‘The Ballad of Cherokee Bill’ has a sweet sound that feels very cheery.

‘All the Paths’ is a standout perhaps because of its minor keys and slighting haunting sound. This might be my favorite, at least today. It’s simple, yet complicated. Very nice.

I noticed that Tim and Terri Dittmar (of Annabella) play on this record and Tim helped produce, engineer and mix it. Sweet!

In fact this whole record has got a sort of sweet sensibility to it. Even though the songs aren’t always happy.