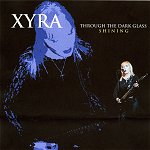 Xyra Harper-Cann formerly of Xyra and Verborgen has released her first solo album, and what a treat. She’s not playing entirely alone however, she’s enlisted some great musicians to help her out.

Xyra’s voice is very dramatic, deep and theatrical. She’s been compared to Marlene Dietrich and I can see why.

The music is just as dramatic as her voice. It’s got an almost Celtic, Dead Can Dance, Loreena McKennitt feel at times. But also has the wailing guitar prevalent in those rock ballads of old. The music also reminded me of something else I could not place it. I asked my husband who it reminded him of and he said “Someone from the 80s.” but couldn’t place it either.

The production is first class, this sounds like a major label recording.

Stand out songs: “Liquid Light” and “Chaos in Search of Meaning”
Posted on December 15, 2004