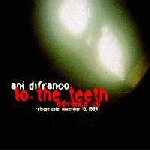 This is one of my new favorite Ani CDs. She never ceases to amaze me! I seem to like every new recording more than the last. As I mentioned before, she is joined by Prince and also her former touring partner, Maceo Parker.

This CD is very funky as you might well imagine!
The song, “Freakshow” is such a freaky song that my husband came over to my computer when I was listening for the first time, and said, “What the hell is this?” and picked up the CD. He was surprised to see it was Ani. After more listens it doesn’t seem that strange anymore, but it is still very cool.

I first heard Ani and band perform the song “Providence” on her tour through here last October. It is a beautiful song and I was really disappointed when it didn’t show up on “Up Up Up Up Up Up”. But now we get it in all it’s 7 minute and 18 second glory. I happen to have a copy this song being performed at the show here and since it is engraved on my brain from over listening, this version was different to my ears, but I like it nonetheless…and you can really tell that “Prince” is contributing some of his funky style.

This is a very strong CD and I think that even in it’s odd-ness, it will grow on everyone, especially if you already like Ani’s music. This maybe isn’t a good first try for someone just getting into her though.

On the title track, “To The Teeth”, which she performed here at Midway Stadium last July (see review) she speaks (sings) of what people with guns are doing to America . “I’m gone take all my friends / and I’m gonna move to Canada / and we’re gonna die of old age.” Sounds good to me!