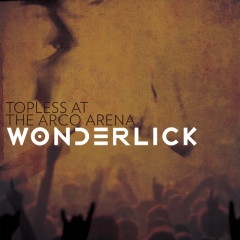 I was a fan of Too Much Joy in the early 90s. I even saw them at Glam Slam (Prince’s club here in Minneapolis – the name has changed many times). They were on the bill with Material Issue (anyone remember “Valerie Loves Me!”?) and another band who’s name escapes me. Anyway, I liked them. I wasn’t a diehard fan, but I had an album or two…or three.

They sort of faded away and it was a time when there was so much music bombarding my ears that if one or ten of my well-liked bands fell off my radar I hardly noticed. Therefore, I didn’t realize that what happened was, in the words of their official bio they “decided to call it a day, grow up, and get real jobs.”

So I was happy to hear that at least two of the guys Tim Quirk and Jay Blumenfield are back in the business and now calling themselves Wonderlick.

While, yes, the sound is a bit more grown up, there remains that fun jingly jangly pop that makes the listener want to sing along and prevents one from sitting still.

We Run the World is maybe the most ‘Too Much Joy’ish to me.

I like You First. It’s a little slower than some of the others, but still has f-bombs, god love ’em.

The Case Against Tattoos is almost disco.

This is a really fun party record, or at least some of the songs will be great on my party mixes.

Note: On their website, they’re doing a ‘name your price’ for it. As of this writing, the average price is 17.90