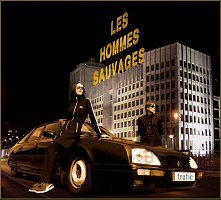 Les Hommes Sauvages hail from Berlin despite the name and they play energetic rock. Member Thomas Wydler has played with the Bad Seeds and Christophe Hahn has played with Hugo Race and the Swans.

In My Room is a swift rush of a song with singer Viola Limpet sounding beautiful. Its repetitiousness makes me think of Dick Dale.

Stern an Stern is a slow, confident song that puts the emphasis on Limpet’s lovely vocals.

They cover Gainsbourg’s Je Suis Venu te dire at a faster pace than the original and still retain the melancholy air.