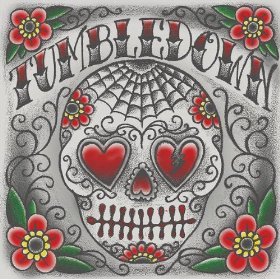 I didn’t want to like this because I thought the I thought it was pretty egotistical to name the band with your name. So I wouldn’t say I went into it with a totally open mind. But as luck would have it I am digging it.

This is an album full of party/drinking anthems. It’s fun and raucous without being super obnoxious. It’s pretty cool, it’s poppy, raucous rock songs about getting drunk among other things.

The opening song, Let’s Drink, has already made its way onto one of the mix CDs I make to listen in my car (I don’t have the MP3player hook up yet). And it’s a great car song. Fun to sing along with while driving home from work on a Friday afternoon.

-from Came Here to Fight

OK those two quotes my not sound like high art, but it’s fun, it’s clever and I dig it.

Break out of History actually reminds me of Punk Rock Girl (Dead Milkmen) with its fast-paced lyrics. Though it’s not as punk. But I bet you will have trouble keeping your leg from wiggling. Actually many of these songs have that affect on me.

Movin’ On is almost country. It has certainly got some twang. They really take it down a notch and create a really catchy song that if played on the radio would everyone’s ear worm.

At times they also remind me of Green Day and there are also shades of They Might be Giants.

I was about to pick out some more songs that I liked, but I realize I’d probably just end up picking them all eventually. It’s just a really fun album. Good summer listening (along with your favorite adult beverage.)