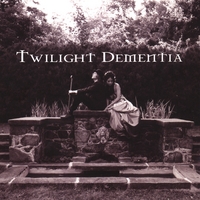 Twilight Dementia consists of John Kruass and Jennifer Mendiola, they play an eclectic brand of music. They take elements of darkwave, Americana and rock and out comes their very own blend.

Good Enough is an interesting song that blends Mendiola ‘s pristine vocals with a funky backdrop.

A version of Bob Dylan’s A Hard Rain’s a Gonna Fall gives the Bryan Ferry’s a run for its money as the most inventive cover of that song. This time the song becomes a soft hymn for these troubled times. Mendiola’s lead vocal and the backing makes for a compelling listen.

The Stones’ Gimme Shelter is another gamble that pays off for the band, the heavy and dramatic original becoming a softer, eerie thing in the bands capable hands. Mendiola’s lead vocals as ever, excel. Krauss’s lead guitar impressively takes charge towards the end.

The closing Matter of Time is a great song, an endpiece, which makes the lead vocal shine. In this age it’s nice to see that the band have taken time to make the design of the album cover look impressive. The black and white images of the duo are beautiful to look at and captures the mood of the album well.