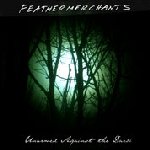 Feathermerchants new album (due in July) is very good.

Since the first album the lead singer has left and been replaced by Shannon Kennedy. It hasn’t hurt the band one bit; their folk-influenced sound is still great.

The chilling tale “9th Ward” is set to an up tempo melody and is sung sweetly by Kennedy. The contrast is used effectively.

“Dan” is evocative and gripping.

“Farmer’s Night Out” has lead vocals by Pete Veru who handles the task well.

“Daffodils” has a sad lyric that is complimented by a more robust instrumental backing.

The low-key cover of Psychedelic Furs “Heartbreak Beat” is a standout. It gives the song a fresh coat of paint.

The undulating epic “Ursuline” is the best song here. Its Arabic-scented sound and ace musicianship rides the album to its close in a great way.

It’s an album that proves the band are here to stay.