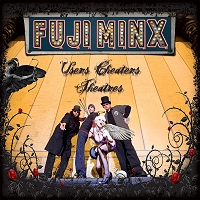 Lead singer Greta Valenti has a voice that recalls 80s grrl rockers, it’s a little nasal and sounds like she’s scrunching up her face when she sings. Sort of like Cyndi Lauper but also reminds me of Gwen Stefani. It’s not perfect for every genre, but it definitely fits here nicely.

These guys are really theatrical. They sing about death and blood but the music is very orchestral. In fact, the way it’s recorded almost sounds like it’s a stage play instead of a studio album. I imagine they’d put on a great live show and have really cool videos. They’re obviously a very creative bunch. I can’t help picturing something like Sgt. Pepper’s when I listen to this. It’s sort of a fantasy story record.

The songs are fun and perfect party material. I especially like “But No No No”. It’s got cool vocal distortions and the melody is great.