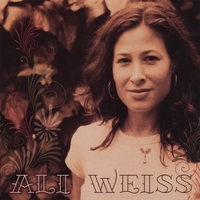 Ali Weiss has released an album filled with pleasant folk music with a pop edge. She has a strong voice that blends well with the overall sound.

Opening number, Count on You is a nice stand out. It’s possible that it’s just that I’ve heard it more than the others, it being track 1, but I do like it. It’s got a nice easy feel.

Does She Know has a bluesy edge but still folky. I really like the melody of this one. It’s unpredictable.

Some of these songs have a choral sensibility. In that, I mean that I can imagine large choirs singing back up for her.

This is one of those records I like a lot, I just find a hard time thinking of unique and/or intelligent things to say about it. But she’s good and if you like most of the music generally featured here chances are you’ll dig this as well.