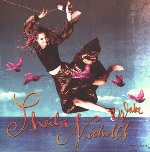 I’d heard some of these songs already because Sheila’s EP, [How Strong] was sent to me a few months ago.

So I won’t go into the songs that are on that one except to say that they’re my favorite on the album. Especially Bread and Water.

The rest of the CD is very good as well. Sheila has a sound unlike any other, though she’s reminiscent of many. Her voice is sweet, sexy and strong; her music is moving; and her lyrics are powerful. The music ranges from trip-hop to pop to rock.

I’m going to have the same complaint I always have when the record company does not include the lyrics. To me the lyrics are a huge part of the music and sometimes it’s hard to understand what the person is singing so I like to be able to read along. Not possible with this CD as well as with a lot of others I’ve gotten recently. But don’t let that prevent you from hearing this great new artist.

5 Stars Comment: I don’t know whether or not the copy of “Wake” you received was just a promo, but the actual album definitely does contain a full list of lyrics to all the songs (except the bonus track). –Dan ~Dan on Monday, August 2, 2004Ed. Note: Thanks Dan, I think mine was a promo copy. 🙂