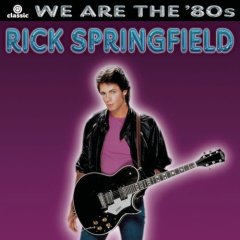 Ah dreamy Rick Springfield. Was there a girl in 1981 that could resist his charms? I think not!

I had a friend who was a huge Springfield fan and we had to go to one of his concerts for her 16th birthday. I think I had “Jessie Girl” on a 45 (that’s like a single to you young kids) but other than a casual admiration I was not all that hooked on him. Cute, sure. But I never considered myself a huge fan.

So when I put this record in, I thought I’d know one…maybe two songs. Boy was I wrong! I got to track 10 before a song came on that I didn’t know the lyrics to. I’m embarrassed and proud at the same time.

I think I even did some office chair dancing.

Like the others in this series I have seen the packaging is nice. The liner notes have a nice little story about the artist. It’s all very brightly colored 80s style. I just wish they had included the lyrics.

If all your Rick Springfield songs are still on LP and you no longer own a record player, this is a good find. All the hits (and some lesser known ones) in one place.

[Rick Springfield Official Site]
His site says on the front page: “Some material may be inappropriate for people who don’t know how to rock” so beware y’all!