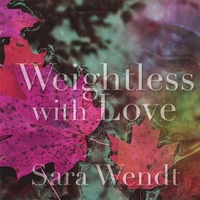 I reviewed Sara Wendt’s previous release, Here’s Us and I really enjoyed it. So I was happy to get this in the mail, knowing already that I’d like it. I was right.

It’s hard to categorize her music. I guess it’s rock, but there’s a definite acoustic sensibility. She can rock out though. For the most part this record is multi-layered rock.

One song that really stands out to me is King of the Ghosts, which it almost pains me to say because it’s one she didn’t write. But one of the things I like best about it is what she does with her voice. She’s got this way of creating this lilty almost yodel thing that is so enchanting without being too affected. She does it on other songs too, but it really shows on this track.

I also like Weightless with Love. Well, actually I like all the songs, but that one stands out (which I guess is why the record was named after it!).

This is a nice record that I think many of you would enjoy.