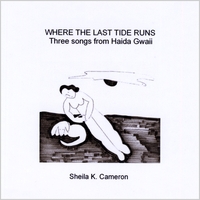 This has been in my shuffle for quite some time now. But I never had any notes on it. I think maybe my Win Amp doesn’t like it because I honestly don’t think it’s ever played any of these songs. So I’m giving it some one on one time. Just like the dating shows do.

This is a short little EP containing only three songs. There’s something a little theatrical to the vocal style of Sheila K. Cameron.

Haida Gwaii is a set of islands in British Columbia which inspired these tunes. It’s also known as Queen Charlotte islands. It sounds like a beautiful place.

The songs are like little stories. Two were written in the early 70s and just haven’t seen the light of day until now. They’re part of a larger collection of unheard music. Her note states that she’s mostly sung other people’s songs, so I gather this is a way to get her feet wet singing and releasing her own material. I don’t know who’s songs she sang before, but these are lovely and I encourage her to let more of these babies out into the world.

← Have you heard Ingrid yet?
Album Review: Breakaway by Mary Redente →