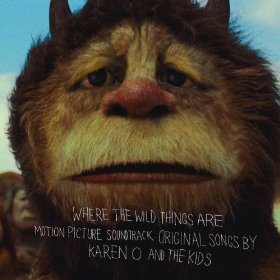 A fun game that will keep all of the family entertained whilst listening to this quaint, quirky and a little out there soundtrack. Can be had by trying to figure out which of the screams, yelps and incoherent murmurs belong to the Yeah Yeah Yeahs (YYYs) leading lady, Karen O and which belong to the children?

Short and serene opener ‘Igloo’, immediately draws attention to the fact that this high profile and frivolous break from her day job, could be exactly what Karen O needs? Recently, some critics have been getting a little weary of the provocative disco indie that has been the YYYs’ signature for years. This song alone, illuminates O’s ability to turn her voice and tone to tuneful and contented and shows that she is certainly not stuck in a foxy and raw straight jacket. Soothing lullaby styled humming soothes and relaxes you into this new (ad)venture), with the tenderness of the leading lady’s touch skipping over the restfully weaving guitar stroke of Imaad Wasif.

This is immediately contrasted by the bounding, carefree anthem ‘All Is Love’, with fellow YYYs member Nick Zinner, providing a more strident guitar push. O’s inner child is set free into the playground of musical abandon and her voice is almost lost in the enthusiastic kiddie chorus. This frisky show of abandon makes it easy for you to forgive and even embrace a return to her raw and rugged ways, ‘Capsize’.

Key-led melodies and more vocal eloquence seeps out in ‘Worried Shoes’, helping you to immediately suspend your disbelief. Something that’s absolutely necessary for tunes crafted to accompany a film featuring over-sized, delusional puppets. As the album grows, frivolity and fun mix together like blue Smarties and an excitable school kid. Nearly every film and accompanying soundtrack needs a slow, stirring and thoughtful acoustic ode and, ‘Cliffs’ provides this to a tee. Despite the fact that O is effectively entering new territory with a number of this sort, she pulls it off with tenderness. The vocal element is subtle, complementing the stirring harmony (mainly provided by the skilful touch of Wasif again).

Rodriga Y Gabriela territory is bounded into through the classical guitar led rhythm romping instrumental, ‘Animal’ that’s sure to bring out your primal urges. This rhythm touch gains momentum as O opts to jump on the ride and gives her vocals some coarse rhythm. Making ‘Heads Up’, a bounding pop folk push towards the latter end of a fresh, foraging and young spirited fourteen track parade. O and co have achieved variety and have also managed to make an album that could also stand alone from the film that it’s meant to accompany.