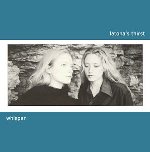 Latona’s Thirst highlights twin sisters Jennifer And Sarah Schroerlucke who sing beautiful harmonies and wrote all the songs on “Whisper”. They also play instruments, Sarah on the piano and Jenn on guitar.

Their music has a decidedly “Twin Cities Feel” to it though I’m afraid I can’t describe what that entails but I’ll try. The vocals are at the forefront…clear and louder than the music. The instrumentation has a jangle-y, distant and almost tinny sound and the mood is mostly “up”.

Though Latona’s Thirst veers from this a bit on tracks like “Kinda Tired” and “The One I Knew” which is are very pretty songs with great harmonies and you can hear the “music” much more.

“The Apartment” is a stand out track for me because of the lovely guitar and piano parts and the fact that it is predominantly one singer with the other one doing backup (as opposed to the two of them singing the whole song together in harmony). The lyrics are also great on this one:

This is a very nice debut CD and I look forward to hearing more in the future and to catching them live as well.

[Latona’s Thirst Official Site]
2008 Update: they are now just called latona, but there website has not be updated since 2005.